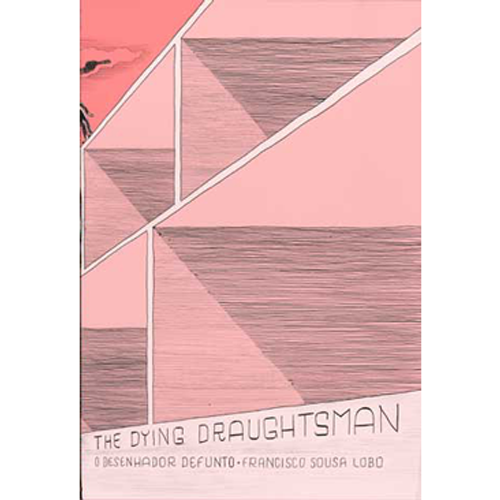 Francisco Koppens has a dying profession, a dying religion, lives in a dying home and has dying thoughts. He is a Portuguese architectural draughtsman living in London who believes he is destined to commit suicide. He talks to his wife but she doesn’t answer back. He does erotic comics as a private compulsion, only to cover them with black ink at the end. He ends up with black monochromes which he then tears to bits. The sign of the monochrome as self censorship permeates Koppens’ life. He visits endless art exhibitions, only to be smitten by dread and doubt. We follow him from depression to psychosis, and then back to a sort of starting point.

The Dying Draughtsman could be described as a fictive construction built on real, personal events lived through the life of the author.

Critical reception: Chosen as part of the 10 best books of 2013 by Sara Figueiredo Costa, in the newspaper Expresso … Francisco Sousa Lobo’s production is inclined towards forms of comics internal interrogation, especially in their narrative form. An excellent book – Pedro Moura in Ler BD … If Duchamp de-contextualized and re-contextualized his works through the use of photography, Sousa Lobo does it now through comics – Gabriel Martins in Rua de Baixo … Unpredictable and haunting, stimulating and engaging – Paul Gravett … Perfect symbiosis between art and writing – André Coelho … One of the best books of the year – David Campos

This website uses cookies to improve your experience while you navigate through the website. Out of these, the cookies that are categorized as necessary are stored on your browser as they are essential for the working of basic functionalities of the website. We also use third-party cookies that help us analyze and understand how you use this website. These cookies will be stored in your browser only with your consent. You also have the option to opt-out of these cookies. But opting out of some of these cookies may affect your browsing experience.
Necessary Sempre activado

Any cookies that may not be particularly necessary for the website to function and is used specifically to collect user personal data via analytics, ads, other embedded contents are termed as non-necessary cookies. It is mandatory to procure user consent prior to running these cookies on your website.